An American performance painter who uses music and color to inspire

Artists transform an empty canvas into a work of art through their skill, experience, inspiration and senses. David Garibaldi’s life and transition into a world-renowned performance painter is no different.

The culture and color of graffiti art served as an early inspiration for Garibaldi. Born in Los Angles, he later moved as a youth to South Sacramento. It was here that he learned to enjoy the use of his hands and body through art on “larger and somewhat illegal canvases” by painting graffiti as an angst teen. Graffiti artist and high school dropout, he was living day-by-day. The only constants in his life were music and art.

Garibaldi had always combined his passion for music and color, or rhythm and hue, in his artwork. But it wasn’t until viewing performance painter Denny Dent’s portrait of Jimi Hendrix that Garibaldi discovered how his passion for paint and music could be an inspirational experience for more than just himself. He discovered music-driven-art, and in some ways it discovered him, revealing a portrait of passion and purpose.

Garibaldi’s synergy of music and art is what makes him unique as a painter and a performer.

Rhythm and Hue // The Performer

The performances he unwittingly practiced as a graffiti rebel in his garage is now on a public stage. As a performance painter, Garibaldi creates images through his body movement and brushes while communicating via music to an amazed audience.

“I create images in an entraining way and my hope is to inspire the audience to use their passion to benefit and inspire others,” said Garibaldi. “That is music and color. That is rhythm and hue.”

For this young artist, musical inspirations include U2, Kanye West, Jay Z, Stevie Wonder, Marvin Gay, The Beatles, Lady Gaga and Glitch Mob. Featured shows also include the beats of Garibaldi’s exclusive DJ, Joseph One. The energy of these performances is both mesmerizing and engaging and there is nothing like it in the world.

Hundreds of thousands have witnessed Garibaldi paint live by transforming a blank black canvas into pop art icons through his “Rhythm and Hue” shows. Garibaldi has performed for Fortune 500 companies including AT&T, Intel and Disney. He has also been featured at charity events for Playboy, NBA, and celebrities Snoop Dog, Santana, Tommy Lee, Dave Navarro and Blue Man Group.

The Danger Room // The Studio

Garibaldi’s portfolio and sophistication as an artist goes far beyond his accomplishments as a performance painter. Influenced by Andy Warhol, Ernie Barnes, KAWZ, Takashi Murakami, Al Hirschfeld and the comic books of his youth, Garibaldi’s studio or “the danger room” serves as his stage for these paintings of vibrant colors and fluid lines.

These smaller canvases embody the color and musical influence that is unique to Garibaldi’s performance work, but with a style and detail in each stroke.

In addition to being featured in galleries across the country, Garibaldi’s art is now an international brand and reproduced into posters, clothing apparel and iPhone cases. He is a featured Disney Fine Artist and has secured licensing rights for Jimi Hendrix, Bob Marley and Elvis Presley.

Lessons and Influencers // The Inspirations

Art was an ever-present part of Garibaldi’s life. From the moment he picked up a crayon as a young child and started to draw, he knew his passion for creating color and images would serve a greater purpose. Creativity surrounded him through his father’s music and dance and his mom’s work as a beauty stylist. Garibaldi picked up his first instrument, a trumpet, in fourth grade and shortly after developed a love for the beats and rhythms of hip hop.

He took the initial first strokes and steps by combining rhythm and hue, music and color, while listening to hip hop icons Run DMC and Snoop Dogg and painting graffiti with his middle school friends. Music remained a big part of his life joining high school hip hop dance group, Boogie Monstarz, but art became a more predominant force in his life as he perfected his skill in high school courses.

As he matured, so did his skill. By 2003, Garibaldi began his personal Harlem Renaissance by moving from graffiti to canvas and pulling from the cultural influence of jazz and its smooth sounds. It was then that he saw “something bigger.” That inspirational and influential moment hit him while first viewing the work of Denny Dent and continued as he developed his personal faith. He discovered himself as an artist and a person; he discovered how he would live his life with passion and purpose.

Living with Passion and Purpose // The Philanthropist

Inspiration serves Garibaldi in his art and his life. “Living with passion and purpose” drives Garibaldi every day to transcend what he does as an artist into a philanthropist.

A high school animation teacher first inspired him to take his passion for graffiti and turn it into a more positive and creative direction. Garibaldi never forgets this encouragement and more importantly the value of someone believing in him. Every performance is an opportunity to give back – either through teaching youth or providing resources to the community.

In a few short years, and at 29 years old, Garibaldi raised over $1,000,000 for nonprofits and charities across the country through his art. He works closely with charities such as Special Olympics, Echoes of Hope, Sacramento Children’s Home and World Vision.

To request David Garibaldi to be a speaker at your next event, contact:
Robinson Speakers Bureau | The Gold Standard For Keynote Speakers
+1 646-504-9849 | info@robinsonspeakers.com 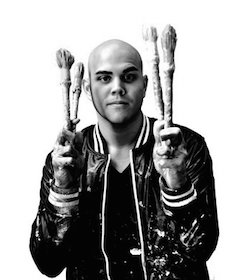