Dave Ramsey – One of the great motivational speakers in America.

Dave Ramsey is America’s trusted voice on money and business. His four New York Times best-selling books– “Financial Peace,” “More Than Enough,” “The Total Money Makeover” and “EntreLeadership”– have sold more than 7 million copies combined. The Dave Ramsey Show is heard by more than 6 million listeners each week on more than 500 radio stations.

His show and writings strongly focus on encouraging people to get out of debt. His books and broadcasts often feature a Christian perspective that reflects Ramsey’s religious beliefs. Ramsey was named the 2009 Marconi Award winner for Network/Syndicated Personality of the Year.

Ramsey has been featured on many media outlets including The Oprah Winfrey Show, 60 Minutes, and The Early Show on CBS. He made big time gains on Dr. Phil. He recorded a pilot and six unaired episodes of The Dave Ramsey Project for CBS. He was the host of The Dave Ramsey Show, which aired at 8 p.m. ET and repeated weekdays on the Fox Business Network until June 2010.

To request Dave Ramsey to be a speaker at your next event, contact:
Robinson Speakers Bureau | The Gold Standard For Keynote Speakers
+1 646-504-9849 | info@robinsonspeakers.com 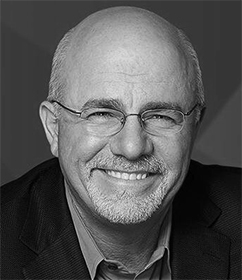