Chris Patten Biography:
Christopher Francis Patten was born in 1944. He was educated at St Benedict’s School, Ealing and Balliol College, Oxford, where he read Modern History and was elected a Domus Exhibitioner. In 1965 he won a Coolidge Traveling Scholarship to the USA.

He was elected as Member of Parliament for Bath in May 1979, a seat he held until April 1992. In 1983 he wrote The Tory Case, a study of Conservatism.

Following the General Election of June 1983, Lord Patten was appointed Parliamentary Under Secretary of State, Northern Ireland Office and in September 1985 Minister of State at the Department of Education and Science. In September 1986 he became Minister for Overseas Development at the Foreign & Commonwealth Office. He was appointed to the Privy Council in 1989 and was appointed a Companion of Honour in 1998. In July 1989 Patten became Secretary of State for the Environment. In November 1990 he was appointed Chancellor of the Duchy of Lancaster and Chairman of the Conservative Party.

Lord Patten was appointed Governor of Hong Kong in April 1992, a position he held until 1997, overseeing the return of Hong Kong to China. He was Chairman of the Independent Commission on Policing for Northern Ireland set up under the Good Friday Peace Agreement, which reported in 1999.

In September 1999 he was appointed European Commissioner for External Relations, a post he held until November 2004. On leaving office in Brussels he was made a life peer and took his seat in the House of Lords in January 2005.

He is an Honorary Fellow of the Royal College of Physicians, Edinburgh, and Honorary Fellow of Balliol College, Oxford. He was Chancellor of Newcastle University in 1999 until 2009, and elected Chancellor of the University of Oxford in 2003. He is Chairman of the International Crisis Group, which attempts to identify and prevent potential conflicts. In January 2006 he was named the UK Co-Chair of the UK-India Round Table.

Lord Patten reads a lot and is keen on tennis and gardening. In 1998 he published East and West, a book on Asia and its relations with the rest of the world, followed in 2005 by Not Quite the Diplomat: Home Truths about World Affairs. His latest book What Next?: Surviving the 21st Century was published in 2008 and was described in the Financial Times as “exquisitely written, he is an eloquent and wise voice in a cacophonous world”, and by the Guardian as “An extremely impressive book. It is a very long time since a leading British politician produced anything as ambitious or as well written.”

To request Chris Patten to speak at your next event, contact:
Robinson Speakers | The Gold Standard For Keynote Speakers
646-504-9849 | info@robinsonspeakers.com 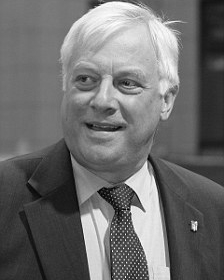