Academy Award-winning producer Brian Grazer has been making movies and television programs for more than 25 years. As both a writer and producer, he has been personally nominated for four Academy Awards, and in 2002 he won the Best Picture Oscar for A Beautiful Mind. In addition to winning three other Academy Awards, A Beautiful Mind also won four Golden Globe Awards (including Best Motion Picture Drama) and earned Grazer the first annual Awareness Award from the National Mental Health Awareness Campaign.

Over the years, Grazer’s films and TV shows have been nominated for a total of 43 Oscars and 152 Emmys. At the same time, his movies have generated more than $13.7 billion in worldwide theatrical, music and video grosses. The Producers Guild of America honored Grazer with the David O. Selznick Lifetime Achievement Award in 2001. His accomplishments have also been recognized by the Hollywood Chamber of Commerce, which in 1998 added Grazer to the short list of producers with a star on the Hollywood Walk of Fame. In 2007, Grazer was chosen by TIME magazine as one of the “100 Most Influential People in the World.” In 2009, Grazer and his creative partner, Ron Howard, were honored by the Producers Guild of America with the Milestone Award.

Grazer released his first book A Curious Mind: The Secret to a Bigger Life, a New York Times bestseller in April 2015. For decades, Grazer scheduled “curiosity conversations” with notable experts from scientists to spies, and adventurers to business leaders. The book offers a peek into some of these conversations and will inspire readers to unleash their own curiosity.

In 2012, Grazer produced the 84th Academy Awards hosted by Billy Crystal Grazer also produced the film adaptation of Peter Morgan’s critically acclaimed play Frost / Nixon directed by Ron Howard. The film, was nominated for five Academy Awards including Best Picture, and was also nominated for The Darryl F. Zanuck Producer of the Year Award in Theatrical Motion Pictures by the PGA.

It was while he was executive-producing TV pilots for Paramount Pictures in the early 1980s that Grazer first met his longtime friend and business partner Ron Howard. Their collaboration began in 1985 with the hit comedies Night Shift and Splash, and in 1986 the two founded Imagine Entertainment, which they continue to run together as chairmen.

To request Brian Grazer to speak at your next event, contact:
Robinson Speakers | The Gold Standard For Keynote Speakers
646-504-9849 | info@robinsonspeakers.com 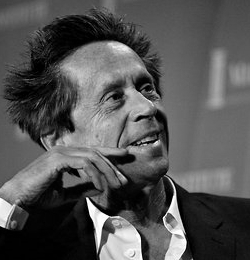