Author of Kitchen Confidential: Adventures in the Culinary Underbelly; Host of the Travel Channel’s Anthony Bourdain: No Reservations

The undisputed bad boy of the food world is without a doubt Anthony Bourdain. As a chef, author and television host, Anthony Bourdain has proved time and again that he does not play by anyone else’s rules and freely offers his opinion on every topic.

An executive chef working at the highest levels in the culinary world in New York, Anthony Bourdain first gained notoriety when he published the behind the scenes tell all “Kitchen Confidential: Adventures in the Culinary Underbelly.” The book became an overnight success, as did Bourdain, who was at the time working at Brasseries Les Halles. The New York Times bestselling volume led to other Anthony Bourdain appearances in print, including “Anthony Bourdain’s Les Halles Cookbook,” “Bone in the Throat,” “Gone Bamboo,” “Typhoid Mary: An Urban soma carisoprodol muscle relaxant Historical,” “No Reservations: Around the World on an Empty Stomach,” “Medium Raw: A Bloody Valentine to the World of Food and the People Who Cook,” “A Cook’s Tour” and “The Nasty Bits.”

Most people remember Anthony Bourdain appearances as the host of the Travel Channel show “No Reservations,” in which he travels the world examining different cultures and their cuisines and definitely does not shy away from trying unusual foods. He and his team earned an Emmy Award nomination for a 2006 episode filmed in Beirut during the Israel-Lebanon conflict. Other Anthony Bourdain speaker appearances on television have included serving as a judge on Bravo’s popular “Top Chef,” “Miami Ink,” “Bizarre Foods with Andrew Zimmern” and “Yo Gabba Gabba!”

Anthony Bourdain was found dead in his hotel room Friday, June 8th 2018 in France while working on his CNN series on culinary traditions around the world. He was 61. 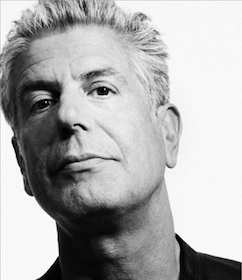