Andre Kirk Agassi (born April 29, 1970) is an American retired professional tennis player and former World No. 1, who was one of the game’s most dominant players from the early 1990s to the mid-2000s. Generally considered by critics and fellow players to be one of the greatest tennis players of all time, Agassi had been called the best service returner in the history of the game. Described by the BBC upon his retirement as “perhaps the biggest worldwide star in the sport’s history”, Agassi compiled performances that, along with his unorthodox apparel and attitude, saw him cited as one of the most charismatic players in the history of the game. As a result, he is credited for helping to revive the popularity of tennis during the 1990s.

In singles tennis, Agassi is an eight-time Grand Slam champion and a 1996 Olympic gold medalist, as well as finishing runner-up in seven other Grand Slam tournaments. During the Open Era, Agassi is the first male player to win 4 Australian Open titles and those were an Open Era record until Novak Djokovic won his 5th title on 1 February 2015. Agassi is one of four male singles players to achieve the Career Grand Slam (all four Grand Slam championships) in the Open Era and one of seven in history, the first of two to achieve the Career Golden Slam (Career Grand Slam and Olympic gold medal), and the only man to win the Career Golden Slam and the ATP Tour World Championships (won in 1990): a distinction dubbed as a “Career Super Slam” by Sports Illustrated.

Agassi was the first male player to win all four Grand Slam tournaments on three different surfaces (hard, clay and grass), and the last American male to win the French Open (1999) and the Australian Open (2003). He also won 17 ATP Masters Series titles and was part of a winning Davis Cup team in 1990, 1992 and 1995. Agassi reached the World No. 1 ranking for the first time in 1995 but was troubled by personal issues during the mid-to-late 1990s and sank to World No. 141 in 1997, prompting many to believe that his career was over. Agassi returned to World No. 1 in 1999 and enjoyed the most successful run of his career over the next four years. During his 20-plus year tour career, Agassi was known by the nickname “The Punisher”.

After suffering from sciatica caused by two bulging discs in his back, a spondylolisthesis (vertebral displacement) and a bone spur that interfered with the nerve, Agassi retired from professional tennis on September 3, 2006, after losing in the third round of the US Open to Benjamin Becker. He is the founder of the Andre Agassi Charitable Foundation, which has raised over $60 million for at-risk children in Southern Nevada. In 2001, the Foundation opened the Andre Agassi College Preparatory Academy in Las Vegas, a K-12 public charter school for at-risk children. He has been married to fellow tennis player Steffi Graf since 2001.

Since retiring after the 2006 US Open, Agassi has participated in a series of charity tournaments and continues his work with his own charity. On September 5, 2007, he was a surprise guest commentator for the Andy Roddick/Roger Federer US Open quarter-final. He played an exhibition match at Wimbledon, teaming with his wife, Steffi Graf, to play with Tim Henman and Kim Clijsters. He played World Team Tennis for the Philadelphia Freedoms in the summer of 2009. At the 2009 French Open, Agassi was on hand to present Roger Federer, who completed his Career Grand Slam by winning the tournament and joined Agassi as one of six men to complete the Career Grand Slam, with the trophy.

Also in 2009 Agassi played at the Outback Champions Series event for the first time. He played the Cancer Treatment Centers of America Tennis Championships at Surprise, Arizona, where he reached the final before bowing to eventual champion Todd Martin. He also announced that he will not be playing the tour on a full-time basis, and played the tournament as a favor to long-time friend Jim Courier. Agassi returned to the tour renamed for the PowerShares Series in 2011 and participated in a total of seven events while winning two. Agassi beat Courier in the final of the Staples Champions Cup in Boston and later defeated Sampras at the CTCA Championships at his hometown Las Vegas.

In 2012 Agassi took part in five tournaments, winning three of those. In November, at first he won BILT Champions Showdown in San Jose, beating John McEnroe in the final. The following day, he defended his title of the CTCA Championships, while defeating Courier in the decisive match. In the series season finale, he beat Michael Chang for the Acura Champions Cup. The series and Agassi came back to action in 2014. Agassi won both tournaments he participated in. At the Camden Wealth Advisors Cup’s final in Houston, Agassi beat James Blake for a rematch of their 2005 US Open quarterfinal. He defeated Blake again in Portland to win the title of the Cancer Treatment Centers of America Championships.

In 2009 in Macau Agassi and Sampras met for the first time on court since the 2002 US Open final. Sampras won the exhibition in three sets. The rivalry between the former champions headlined sports media again in March 2010 after the two participated in the “Hit for Haiti” charity event organized to raise money for the victims of the earthquake. Partnered with Roger Federer and Rafael Nadal, the old rivals began making jokes on each other what ended up with Sampras intentionally striking a serve at Agassi’s body. After the event Agassi admitted that he had crossed the line with his jokes and publicly apologized to Sampras. Agassi and Sampras met again one year later for an exhibition match at Madison Square Garden in New York in front of 19, 000 spectators as Sampras defeated Agassi in two sets. On March 3, 2014 Agassi and Sampras squared off for an exhibition in London for the annual World Tennis Day. This time it was Agassi who came out on top in two straight sets.

To request Andre Agassi to speak at your next event, contact:
Robinson Speakers | The Gold Standard For Keynote Speakers
646-504-9849 | info@robinsonspeakers.com 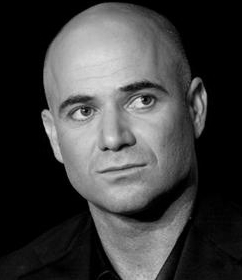